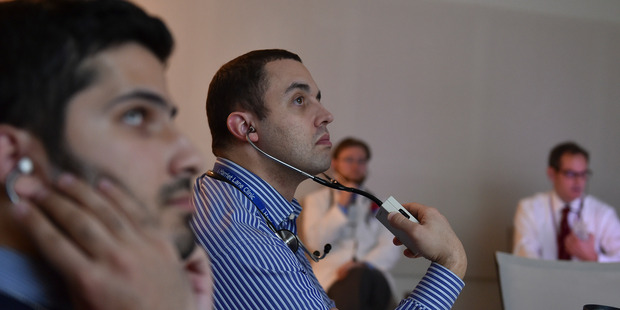 The stethoscope is having a crossroads moment. Perhaps more than at any time in its two-century history, this ubiquitous tool of the medical profession is at the centre of debate over how medicine should be practiced.

In recent years, the sounds it transmits from the heart, lungs, blood vessels and bowels have been digitised, amplified, filtered and recorded. Four months ago, the Food and Drug Administration approved a stethoscope that can faithfully reproduce those sounds on a cellphone app thousands of miles away or send them directly to an electronic medical record.

Algorithms already exist that can analyse the clues picked up by a stethoscope and offer a possible diagnosis.

But whether all this represents the rebirth of diagnostic possibility or the death rattle of an obsolete device is a subject of spirited discussion in cardiology. The widespread use of echocardiograms and the development of pocket-sized ultrasound devices are raising questions about why doctors and others continue to sling earphones and rubber tubing around their necks.

"The stethoscope is dead," said Jagat Narula, a cardiologist and associate dean for global health at the Icahn School of Medicine at Mount Sinai Hospital in New York. "The time for the stethoscope is gone."

Not so, counters W. Reid Thompson, an associate professor of pediatrics at Johns Hopkins University School of Medicine. "We are not at the place, and probably won't be for a very long time," where listening to the body's sounds is replaced by imaging. "It is valuable," he said.

One thing on which both sides agree, however, is that doctors aren't very good at using stethoscopes - and haven't been for a long while.

Medical students and residents listen to their stethoscopes during a training session at Johns Hopkins School of Medicine in Baltimore. Photo / The Washington Post, Ricky Carioti

In 1997, researchers examined how well 453 physicians in training and 88 medical students interpreted the information obtained via stethoscope. According to their study, "both internal medicine and family practice trainees had a disturbingly low identification rate for 12 important and commonly encountered cardiac events."

Nineteen years later, another team tried to determine when doctors stopped improving at "auscultation" - the art of listening to the body to detect disease. The answer: After the third year of medical school.

Worse, the researchers wrote in the Archives of Internal Medicine, that skill "may decline after years in practice, which has important implications for medical decision-making, patient safety, cost-effective care and continuing medical education."

That can't be what French physician René Laennec envisioned in 1816 when, reluctant to place his ear against a woman's chest to listen to her heart, he rolled sheets of paper into a tube that amplified the sounds. He went on to invent the stethoscope and is considered the father of auscultation.

In 2016, the device remains one of the last instruments that health care providers use to infer the nature of a problem, rather than viewing it directly.

Doctors "are the most conservative people on earth," said Sanjiv Kaul, head of the division of cardiovascular medicine at the Oregon Health & Science University. "Once they have learned something, they don't want to learn something else." The stethoscope is also an icon, of course. Yet it carries more than symbolic value. It narrows the physical distance between doctor and patient. It compels human touch.

Medicine's familiar list of woes is at least partly to blame for auscultation's decline. Doctors, especially the overworked medical residents who staff hospitals, have much less time to spend with patients. That means less time for physical examinations, including listening with stethoscopes. The demands of electronic medical records have further eaten into time with patients, many doctors complain.

"It's all chart rounds and computer readout rounds. It's horrible. I cringe," said John M. Criley, professor emeritus of medicine and radiological sciences at the David Geffen School of Medicine at UCLA.

For decades now, it has been easier to send a heart patient for an echocardiogram, and that increasingly sophisticated imaging test has proven more accurate than scope-to-chest interpretation of the lub-dubs, clicks, gallops and whooshes produced by the human heart.

Some doctors point out glumly that providers and hospitals can charge separately for echocardiograms. A chest exam with a stethoscope nets nothing extra.

Now the cycle is repeating itself: Young physicians have fewer mentors who can pass on the skill of auscultation. Thompson, Criley and a handful of others teach special classes to doctors-in-training, an effort to push back.

During a late-December session at Johns Hopkins Children's Center in Baltimore, two young doctors and a medical student visiting from Syria listened intently to the recorded sounds of a heart coming through special stethoscopes, which receive an infrared signal from a computer. The "patient" was a teenage athlete who was suddenly having trouble keeping up on the soccer field. Was there a problem with her heart?

All three ventured that there was - perhaps a hole in the wall that separates the heart's top two chambers. This condition, known as an atrial septal defect, was indeed the correct answer.

"Think of the power of what you did," Thompson told the trio. "With no further assistance or technology than your stethoscope . . . you said 'I think she has an ASD.' "

Thompson has collected thousands of heart sounds and created MurmurLab.org for anyone who wants listening practice. This month he will unveil MurmurQuiz.org, a site that will allow professionals, students or anyone else to test their prowess interpreting what the sounds mean.

Some medical schools have chosen a different approach. Starting in 2012, Mount Sinai began giving its students hand-held ultrasound devices that are little bigger than a cellphone but can generate real-time images of the heart right at the bedside. Several other schools will join the experiment next fall.

Stethoscopes retain their value for listening to lungs and bowels for clues of disease, experts agree. But for the cardiovascular system, "auscultation is superfluous. We are wasting [students'] time," Narula said. "Why should I not have an echocardiogram in my hand if it's as small as the stethoscope?"

For now, that device is utilised most commonly in emergency rooms, where speed is critical. Its quality, said Thompson, is not yet good enough for routine use in other clinical settings.

"It is time to discard the inaccurate, albeit iconic, stethoscope and join the rest of mankind in the technology revolution," Kaul, one of the researchers, wrote in an editorial for the Knight Cardiovascular Institute at Oregon Health and Science University.

Others wonder what might be lost when doctors stop placing that round, often cold disc against a patient's skin. In an essay last month in the New England Journal of Medicine, Elazer Edelman pointed out that a stethoscope exam is an opportunity to create a bond between doctor and patient.

"The link between patient and physician . . . is unlike any other relationship between two non-related people," Edelman, a doctor who teaches at both Harvard Medical School and the Massachusetts Institute of Technology, stressed in an interview. "When one physically moves oneself farther and farther away, that link is either frayed or is torn.

"You can't trust someone who won't touch you."